On January 2021 I moved into a new place, a single room in a shared house in London. I set up a standing order and I’m paying £100 pounds per week.

Contract: Holiday let, one year contract, agreed on £100 NET WEEKLY no additional fees.
Contract:
(Imgur: The magic of the Internet)

For half a year there were no issues.

On 8th of June 2021 I’ve received the first letter, stating from now on I have to pay in cash otherwise I will pay 5% bank transfer fee and £40 breach notice fee, and if they don’t receive the money by Monday morning (the day of rent payment) the fees will be as follows : 5% bank transfer, £40 breach notice, £20 late payment each day. Also stating that I can pay monthly by bank but with additional 5% fee.

5th of July Landlord himself showed up in the house to collect the money. I told him that cash payments weren’t agreed on and that I will continue to pay by bank transfer. Even showed him the contract, he said that “the agent had no authority to change the terms of the contract and that she no longer works for them” He got very irritated, started shouting and swearing, and said that I can pay every four weeks. I told him that I can do that if its written down and signed by both of us, he then called me an asshole and started demanding cash payments again. then he gave me a breach notice/fee of £160 (100 rent, 40 breach, 20 late payment) I ignored it because my rent was paid on time!

12th of July Landlord showed up again to collect cash. this time I was recording everything to keep the evidence. He was demanding cash as usual. I showed him my contract and told him that It was agreed to pay by bank and that I paid by bank for half a year and unless its written down and signed by both parties I’m not changing the way I pay. He was threatening me to not return my deposit, saying I will end up on the street and things like that. Also I asked if t I can pay by card but he refused because he doesn’t accept cards and doesn’t have the card terminal. I also said that I wanted to accept the offer to pay every four weeks by transfer but he called me an asshole and left. (All of that is recorded.) 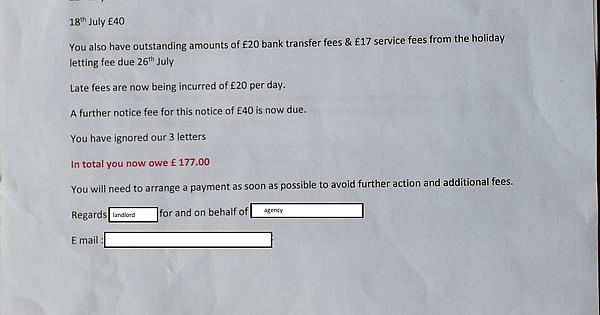 Can I be charged such ridiculous amounts just because its a Holiday let which is excluded from tenancy fees act 2019? what if it was £400 and not £40? where is the limit?

Can they charge me the £17 service charge (as mentioned in 4.12.VI of the contract) when the contract says Total £100 NET WEEKLY and this is all I was told I would be paying and all I’ve been paying for the last half a year (they only started to demand this charge when I refused to pay them by cash)?

Can I be charged for refusing to pay in cash, based on this contract?

I was dumb enough to sign I was not a resident of the UK because I confused it with being a citizen. But I told the agent I was receiving Universal credit and she said it was ok because its not a housing benefit.

What should I do?

(sorry i was limited to 2 links only)

stand your ground the Landlord is a … Record and keep a record of everything This landlord is trying to avoid tax . (would he give a receipt for cash?) Has he said the same to the others in the house?

Look, clearly he is pissed off as he wants to keep the payments off the books. Ignore his rants and record everything - pay nothing!

I would also call the Police to tell them you feel harassed and make a report. They will speak to him and it creates a paper trail should he ever throw your stuff out on the street or something.

I would also call up HMRC and tell them about him really insisting on getting paid in cash and tell them how many people live in the house… They would be all over this I hope.

Other tenants have a page in their contract dedicated for payments, it states how much they pay, when, and signature from recipient.
most of the tenants pay in cash to avoid any problems, there are only two people paying by bank transfer including me.
He would give something that could be called a receipt.

Ask him if he has ever heard of the Tenant Fees Act! None of those charges would be lawful. I would just ignore him and keep paying in the normal way. On the other hand, £100 per week seems very cheap for a room in London. Where is it? If you like it there and don’t want to face notice from him, you could try to reach an accommodation. If so then ask him for written authority to change the method and for signed and dated receipts for each payment. You are sure this really is the landlord aren’t you?

Unfortunately Holiday let is excluded from Tenant Fees Act
Its in NW2, It is quite cheap but I’m not intending to stay any longer than I have to.
Yes I’m 100% sure its the landlord.

Just because he calls it a holiday let, doesn’t mean that it is a holiday let. People don’t usually have a “holiday” which lasts a whole year.
I’m no expert, but it sounds to me has if you might well have a AST and the fact he calls it something else is irrelevant.
Please seek advice from shelter or the CAB, if I’m right he is doing himself no favours.

I missed the bit where you said it was a holiday let. Clearly you have rogue landlord there who either knows nothing of the legal basis of letting property, or just chooses to ignore it.

As the poster above suggests, this is almost certainly not a holiday let, whatever the paperwork says. It’s probably an AST and not only does the TFA apply, but also the deposit legislation and a whole raft of other things. My guess is that the landlord hasn’t protected your deposit, which means that you can claim a penalty of 3x the deposit from him. I would wait till you leave to do that one.

Given how dodgy he sounds I would have to recommend you find somewhere else and give notice.

David Smith of JMW writes letters to such landlords for a small fee .
A solicitor’s letter will put a stop to it