Form to claim against deposit

I’m just wondering if you know what form is supposed to be used for court action against tenants for unpaid rent & broken items etc.

MyDeposits hasn’t a clue. They told me ti go to money claims .gov.uk which is definitely not the right route. It tells me I can’t use money clsins for landlord tenant deposit issues.

I came across online the Claim Form (CPR Part 8). Is that the correct route?

I have to prove I’ve taken action by 23rd or they get the full deposit back.

I know I should probably just let it go but the tenant was such an arrogant axxe.

Is the tenancy over? Are you making a court claim or a claim against the deposit? Theyre different things. If youre claiming against the deposit then with DPS you just log in to your account and propose the amount you want to deduct. Not sure about MyDeposits. You have to assess your losses first of course.

Tenancy is over & tenants refused any amount whatsoever. Rent alone is over £800 plus they flooded my brand new kitchen ruing flat below so had to pay to get that fixed for my neighbour. Lots of things broken, dirty shower curtains in washing machine, left lots of clothes behind & then refused to pick up demanding I leave them hanging on a neighbours gate so they collect from neighbour. No way was I going to do that! They were a complete nightmare.

I did the DPS route but they refused any discussion whatsoever.

The DPS told me ti go to money claims but that’s not correct but no one has been able to tell me what form I need ti fill in!!

Youve now mentioned 2 different deposit schemes. Which is your deposit lodged with?

It’s with MyDeposits. Rentguard did the referencing

Ah sorry DPS was supposed to be Deposit Scheme. I have visual impairment & use voice dictation & it goes haywire sometimes (most of the time)

I’ve sent a letter before action to tenant. It’s weird because I can find absolutely no information out there fur landlords suing tenants but bombarded with info on how to sue your landlord!!

Why do you say you cannot make a claim through money claim online? just been on the website cannot see any mention of being unable to make a claim against a tenant.

You have to decide if you are going down the route of MCOL then inform the DPS or who are holding the deposit that you are choosing to go to the MCOL.

However it is very time consuming and you have to prove that rent has not been paid and hopefully you have a detailed inventory along with many pictures that the tenant has signed for before you handed over the keys, along with being able to prove that they caused the flood, you will not just be able to arrive at the court and state that the tenant caused the flood and therefor the damage.

Sorry, but I still don’t understand why you cant just make a claim against the deposit with Mydeposits in the normal way.

It definitely asks if it is a tenant landlord deposit issue. If you tick yes, it won’t let you proceed. Says you can’t make a claim 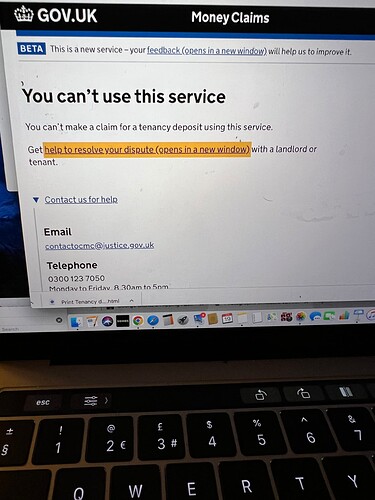 It says: “you can’t use this service “
“You can’t make a claim for tenancy deposit using the service “

The rent arrears alone are just under £900.00. I’ve got tons of emails going back and forth about the leaking washing machine. I lived there prior to them and never had any issues with water flooding the flat below. Within four days of him moving in there is a massive flood in the flat below. I have tons of emails from the woman downstairs. I live next door and she contacted me immediately and I knocked on the door of the flat saying that it’s been reported there is a flood downstairs. He open the door only about 3 inches and didn’t want me to come in. He was hiding something. He knew he was at fault. I could see the water pouring out of the front of the washing machine from the door and said I really need to come in and he let me in. The washing machine was full to the top and that’s with wet laundry. We removed all the laundry and did a test run and it worked perfectly fine. And it’s never done that since we’re not done any work on it. He overloaded the washing machine water wasn’t coming from below the washing machine it was pouring out the front.

I have video evidence of how the flat was when I put it on the market and I have video evidence of what the flat looks like when they took on the tenancy. And I have video footage from the second I stepped in the door and walked around finding loads of issues with the flat showing it filthy, there was laundry in the washing machine what I took out and discovered it was the shower curtains from the bathroom that he had never washed before they were disgusting. Open the wardrobe in the bedroom and it was full of clothes. That was an absolute nightmare trying to get him to pick up his clothes . I’ve been warned about abandonment issues people leave things behind in hope that you throw them out and then they can see you. This guy was bloody clever but not that clever

Amy sorry but I did not experience the page on the website (MCOL) that you did, it may have been that I did not click the button detailing that I was intending to make a claim against a tenants deposit.

Are you not if using MCOL trying to sue the tenant? and with that are you trying to recover more money from your tenant than the amount or value of the deposit?

Whichever route you choose you will need evidence and unfortunately it will be a very time consuming process.

I did a video which was uploaded to my listing & my tenants asked ti view it and did. Yes of course time proven. I then did a video whilst they were there just after giving keys. I then did another video from walking on the door after they left early by 3 weeks. It can be proven the times as everything is time recorded on my phone.

As stated THEY REFUSED to negotiate at all. They wanted entire deposit back.

I have no choice but to go through courts or money claim.

Money chains has now said I can apply if just fur rent arrears. So just have to select that it’s not about a tenants deposit!!!

Have ti fill in an N1 Form for the rest. Could do it all on one form of I wanted but want to make sure I at least get rent arrears claimed as tine running out!!

Update: legal advice has been ti do it all on an N1 form. County court. I spoke to my legal department on my buildings insurance & they said I can just fill the form in and note evidence & full particulars to come. Sending off today. The MYDeposits accepted a snapshot of the filled in form & letter before action as proof I was taking action to meet their deadline. It’s 6 months in the real world ti make a claim but they require 6 months to prove you are doing it. I don’t care if I only get a small portion of the claim back. I’m not letting tenants get away with their treatment of me. Long story!! I never ever had issues with any tenants at all until covid hit. I only had 2 flats at the start. London flat asked for 1/3 off their rent despite earning 90k a year. One of the 3 said his employment would be nil with covid. He was entitled to funding from government. He shared a bedroom with his girlfriend who earned 49k a year & tgey both had over 30k in savings each. I’ve never earned more than 25k a year! I just want to get out.

If you are the registered landlord with the deposit holder, be it My Deposits or DPS, you are entitled to enter the amount of the deposit you wish to retain, when the request for the release of the deposit is made, and notified to you.

It sounds to me like you are somehow trying to complicated a very simple process.

If the tenant disagrees with the deposit apportionment you have requested, then you have 2 options;

I’m absolutely not over complicating things. I’ve already done everything that you’ve suggested to Mydeposits.

And you actually cannot Do money claims online form. As stated, it comes up with a message saying if it’s anything to do with the deposit you cannot use this form. It’s in one form you have to fill-in