I am a landlord. I have a semi detached bugalow.
The neighbour who shares the other part of the semi recently told me that they can see water on their wall. They think the water and damp which they see on their wall is due to chimney pots which are just above the roof is leaking.
Chimney pots sit on my part of the roof.

So, the neighbour wants me to fix it. They want me to put some chimney cowl.

But, my tenants can’t see any damp or signs of water on their side of the wall (in my property). So, we don’t have any issue. The issue is within neighbour’s property.

Do I have any legal obligation to put a chimney cowl or fix the chimney leak just because my neighbour is complaining water is coming from my side of the chimney roof?
Thanks

The chimney that is in the centre of a pair of semis is usually shared. They may have had their pots taken off and capped, only yours are showing… I have repaired many stacks, until you get up there you cannot tell where the water is coming from. It could be a crack in the capping of their side

Why don’t you offer to go halves with them as it might also affect your property in due course.

These bungalows were built in 1970. The neighbour says when the property was built the previous owner of the property wanted a fire burner and the neighbour was using only gas. So, they are saying the chimney stack belongs to me and I have to pay to fix it.

I had a second conversation about it and now they are saying it is the FLASHING LED **
** on their side of the chimney stack is damaged. They are saying the chimney belongs to me, so I have to pay the FULL cost to repair it.

Do I have a legal obligation to fix the flashing on their side of the chimney stack to stop the leak?

They are living in that bungalow for more than 25 years. I bought my bungalow which is attached to theirs only 6 months ago. I don’t know why they left it until now. Hope the previous owner of my property did not agree with them.

All they see is the wall below the chimney stack in the loft is wet. I told them you need to get a roofer to find the cause first and they agreed to that.

If it is flashing led is damaged on their side of the chimney stack, do I have any legal obligation to fix it? Is it not their responsibility to fix it?
Thanks

flashing their side its their problem Saying they only use gas is a red herring. The wall between you and them is a party wall, they look after their side, you look after yours. Just because the chimney is more on your side than theirs matters not, they still have the portion where the flashing is.

Unless a legal agreement was drafted that the chimney stack is now the responsibility of your property then I don’t think they have much of an argument, although I’m not sure what difference it being on your side of the property would make. I suggest you book an initial call with a specialist solicitor, which is usually free of charge.

Thanks @Colin3 and @David122
Your advice gives me more confidence to talk to the neighbour.

I will ask the neighbour to email me whatever their argument is and in my reply to their email, I will tell them that the flashing is on their part of the roof, so it is not my responsibility to fix it and also it is illegal for me to come to your side of the roof and fix something. I will ask them to email instead of contacting me over the phone.

Being a roofer that’s bullshit

@Richard62, do you mean it is my responsibility to fix the flashing?

Richard 62 What is incorrect and who are you replying to?

george 123. Stop wavering. I have been a builder for 50 years and a landlord for 40 years. I have fixed many house problems. next door are trying it on. The flashing is on their side of the roof. .Leave them to it, Do not fix it and then attempt to give them the bill. You will not get paid. If its not leaking your side then that indicates the leak is more on their side.

no, I think he means he has a rubbish job " being a roofer (pause) thats rubbish"

I am not wavering. I am going to tell them to fix it themselves when they contact me about it. I don’t think I have any legal obligation to fix it.

Please see the picture of the chimney stack.
Someone mentioned to me there is only one chimney. So, it can be my responsibility. 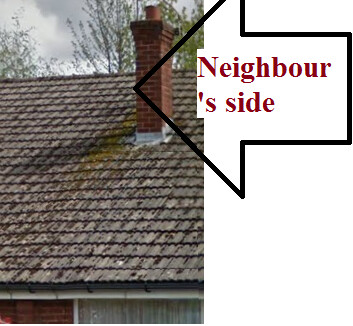 that is a very narrow chimney So there will be a chimney breast in your attic and not in theirs?

Neighbour has a chimney breast in their living room.
I don’t know whether they have one in their attic.

I have a chimney breast in the living room.
I am going back to the property again sometime this week to check the attic.

Then it could be one flue and pot each. IE shared

I’ve had a similar situation. Mediation and sharing is the key to solving this. After a host of roofers got it wrong, we found that it was flashing damage on the neighbours side. We went halves all the same. That’s only a few quid each.

Your neightbour has a chimney breast. Therefore they have the opportunity to use the chimney. They therefore have a responsibility to contribute to the cost of the upkeep of the chimney.

If a person has no interest in a garden, but shares one with other residents, they must still pay towards the maintenance of it. The chimney scenario is very similar.

If they won’t be reasonable and split the cost, I would write to them (registered), explaining your side has no problems but offering to split the cost of the repair. This will be in your interest as the fault will likely develop to affect your side eventually. If they don’t respond favourably, I’d simply let them make an attempt to solve this through a court. Your efforts at mediation will be viewed in a highly favourable manner by the court. The presence of a chimney breast on both sides will also be a key factor in the decision of the court.

I’m confident you will win, but they should be made aware that the legal and court fees will almost certainly outweigh a couple of hundred quid that a roofer will charge each of you.

I had a look at the title plan.
It does not give any idea other than a red box around the boundary of the property.

Due to following reasons, I believe it is a SHARED chimney stack:

I am waiting for the neighbour to tell me what they think.

Point 3 The tv man is not going to ask" is that your chimney.? "That point you should leave out of your argument… Funnily enough when I lived in a semi, a tv man put our antenna on the corner of the shared stack but on the neighbours side. About 3 years later he noticed it. “Colin your antenna is on my side of the chimney can you move it?” I said “Mr Fenton there are people dying from hunger in the world and you are bothered about a tv antenna?” He left it.