Thanks in advance for any advice.

My tenant has just moved out of my flat after 3 years. Until now everything has been great and I think we have both been very accommodating of any situations that have arisen over that period.

The flat was painted just before they moved in.

His young daughter has unfortunately drawn on the walls in every room. I let him know that I would see if we could just touch up the walls, but on seeing it in real life it was clear this isn’t possible.

He is now saying that he will only pay for 50% of the damage as usually, landlords would have to paint the walls every 6 years. He says I should not receive a freshly painted flat for free when I would have had to paint it in 3 years anyway.

I’d like to add that he screwed floor to ceiling extra storage in two of the rooms which mean multiple large holes need filling and painting as well. (he didn’t have permission to do this.)

I don’t think he is entitled to pay 50%, my argument is that if it were wear and tear, I wouldn’t be charging him at all, but this is unfortunately just damage.

Would love to know your thoughts

To avoid further dispute, I’d probably try to counter to 75% stipulating the wall damage is also an issue or worst case agree to go 50% of an average, professional decorator quote (not inexpensive) and then just fill the wall damage and repaint it myself… A fun Sunday afternoon.

Then you’re not at a loss and potentially in profit from the situation… If you’ve the time anyway!

So that make me think, that you believe he is somewhat right? I didn’t think he had a leg to stand on here. If he is then i’m happy to be fair about it - I just didn’t believe he was correct.

I would see that as damage of course you not be painting for wear and tear.

Sam has mentioned on here before that there is a formula the DPS use and think it does take into account average times before something needs repainting/replacing, so unfortunately here may be some truth in that but don’t know how long walls are officially deemed to last. I don’t paint mine every six years and they are still pristine.

A lick of paint to spruce up a few scuff marks is different to trying to cover up a mural surely.

Won’t the walls have to be sealed first to disguise this sort of damage?

I would have done an inspection before tenant moved out and flagged it as an issue to him so he’s got the opportunity to rectify it before leaving to avoid the situation… he’s definitely not in the ‘right’ position as you can’t saunter away from a tenancy having trashed the walls. But he’s at least verbally agreeing to contribute to the costs of repainting, which is better than nothing… Personally, I’m quite DIY handy and after 3 or so years am happy just to crack on and sort stuff like touch ups and painting avoiding conflicts and stress etc… I suppose you could attempt to dock from deposit but would just try for up to 75% of a professional repainting quote so he feels like you’re being reasonable and he’s getting a good deal so less likely to start having to deal with endless emails and disputes which is all time and annoyance.

Then you can either sort it yourself or use a cheaper decorator, job done

Hi, before he moved out, he said he would sort it, but it’s so much worse than he described.

I still have his deposit but it doesn’t cover the damage. There are huge scribbles in every room, you would be able to patch up without painting the whole thing.

I’m just trying to find out if he is legally allowed to only pay for some of the damages because of betterment.

I am not sure where you find it as it was Sam from OR who gave guidance before on a carpet I believe.
Different items have different life spans.

I’ve found the decoration guidelines but not fixtures.

This is a ridiculous expectations for decoration in my opinion. 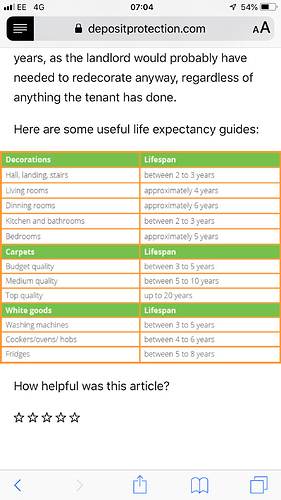 Well done! Blimey yes it is ridiculous. Would never paint that much in my own home and it still looks new!

I had a similar situation in my property recently. The tenant had only been in property 7months before deciding to move on. Prior to moving in, I’d just repainted the whole house. I did a check 3weeks before the moveout date. As soon as I noticed the dirt on the wall, I told my tenant that I am not in a position to refund the full deposit. He made the same argument as your tenant, saying, I would be expected to repaint after each tenancy. I told him that certainly not after 7 months, considering I’d just done so before he moved in. I got a quote from the decorator to repaint the whole house. And we eventually agreed a 50% split., I was going to charge the full cost from the deposit. As others have said 75% of the quote or accept 50% as proposed by the tenant considering the tenant was in the property for 3yrs.

I wouldn’t compare how you treat your home to how a tenant would treat a rented accommodation. It’s all part of the risk of the business. Be glad it’s only repainting that is required after 3yrs.

Alternate action is to take it to DPS dispute resolution, in my experience, their decision favours the tenant better than the landlord. I once had a dispute where I only received £50 from a £300 claim.